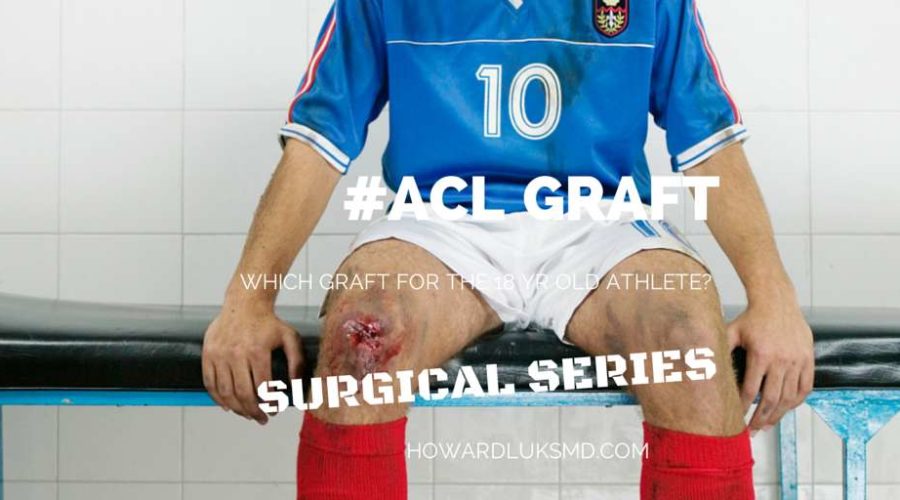 Athletes with a torn ACL in their knee often complain of instability and giving way.  An ACL reconstruction should restore stability of the knee and enable an athlete to return to sports.   Many athletes choose to proceed with ACL surgery with the goal of returning to sports. In order to reconstruct your new ACL, your surgeon will need a graft.  The graft will be used to replace or reconstruct your new ACL.  The choice of the graft you chose may influence whether or not the ACL will tear again in the future.

Before your ACL surgery your Orthopedic Surgeon will discuss different graft choices which they can use to reconstruct your new ACL.  Your ACL graft choice may impact your ability to remain active.  Which ACL graft choice is in your best interest?

In that Expert Series post we discussed cadaver ACL grafts versus ACL grafts using your own tissue (autograft).  We also discussed the various ACL autograft options you have, such as the patella tendon graft versus a hamstring graft.

The debate over the superiority of using a graft from your own body (autograft) versus tissue from a cadaver (allograft) continues. Although to be honest, I’m not quite sure why.  Virtually every study published in this area shows a clear advantage to using your own tissue during ACL surgery in high demand, young individuals. Many papers on ACL graft choice such as this one show that a cadaver ACL graft fails more often than an ACL created from your own tissue.

Yet another paper was recently published in the American Journal of Sports Medicine which compared the survivorship of a hamstring autograft versus a common allograft (tibialis posterior).  This study was performed by the Armed Services.  So these tend to be young, healthy and active people.  The mean age was 29 and the follow up period was 10 years, which is quite long in this area of study.

The results of this research showed that people who had ACL surgery with a hamstring ACL graft from their own body had an 8% failure rate at 10 year follow up.  In stark contrast, the group that underwent an ACL reconstruction with a cadaver (Allograft) ACL graft had a failure rate of 26%. So, you have a 4 fold increased risk of graft failure using an allograft in young, healthy active individuals.

Allograft use for ACL reconstruction led to a 26% failure rate…

In this video, Dr Jeff Berg and I discuss your ACL graft options:

Which ACL Graft Choice Is Best For You

There are reasons to use each of the ACL graft choice options you have.

The proper ACL graft choice for you will depend on many variables.  You should be prepared to review these choices with your surgeon.  Understand why they are recommending one ACL graft choice versus another.

There are many Orthopedists out there who are still fighting this (allograft) downward trend and continue to use allograft in young, high demand individuals.  They claim that if the grafts are not radiated (for sterility) then they should be strong and “do fine”. Well… this paper used grafts which were not radiated at all. Not even low dose.  So, the arguments and proof against the use of allograft in young active people continues to pile up, and the arguments used by those who continue to use allograft are getting picked off one by one.

Bottom line… if you or your child are a young, high demand individual who is active in sports with cutting, pivoting and twisting, the use of allograft should be questioned.  Seek many opinions if necessary.