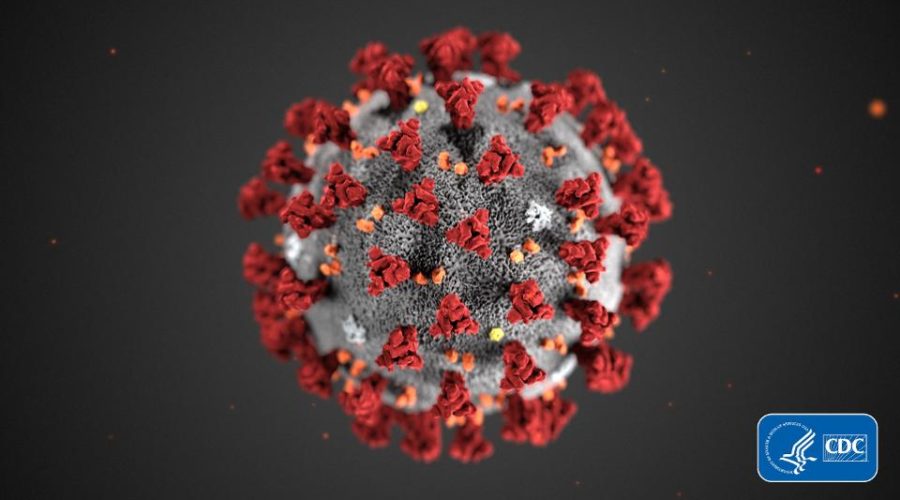 The curve is flattening… conspiracy theories are rising.  Many DC pundits are extolling the virtues of going back to work.  “Grow the economy!”, “The cure can’t be worse than the disease.”  All those very same folks fail to notice the pile of dead bodies in the corner of the room.  And that this pile is still growing by 2000 new dead people each day.

Most areas of the US and many countries around the globe have been able to compress or flatten the curve.  It took a while in some regions, but overall the curve is starting to roll over and trend downward.  See the lower left graph in the picture below.

You hear we are at the peak of the curve in NY… does that mean that the downward side of the curve will be just as sharp as the upward trajectory that brought us here?  Or will the curve sit here at the plateau and slowly creep back down?

What does this mean going forward?  When do we get back to a life of more openness, more interaction, and a life gainful employment?

What happens if we try to get to that endpoint too quickly?  You’ve heard about a second-wave– what is that?

Is social distancing over with?

We are at a very critical time in how we manage the COVID19 pandemic.  There are a lot of people emerging, William Barr being just the latest, who feel that we should drop social distancing measures and get back to work.  Should we?

In NY.. almost 30% of people who are being tested are positive.  These are people who are not sick, or a very mild sore throat, etc.  Other areas of the country report that nearly 12-15% of people are testing positive.  If you were a 55 or older male, a little heavy, hypertensive on medication would you take a one in 3 chance of getting infected?  A one in ten chance?  You are in the high-risk category and have a 15-20% chance of requiring hospitalization and a visit to an ICU?  Is the cure still worse than the disease?

Life is a series of risk-benefit relationships.  If we speak to our friends we all might come up with a different perspective as we weighed all the facts.  Somewhere in the middle, we will find a scientifically sound method to move forward.

We did flatten the curve!  It worked… but

What would happen if social distancing was done away with, and the world tried to get back to work?

Have you seen Singapore’s cases lately?  More on that later.

When we flattened the curve, we squished it down… and spread it out. We did this so we wouldn’t cripple our healthcare system.  We all saw the news articles about what happened in NYC, Italy, Spain, etc.   There was no room to move in Emergency Rooms… regular admissions for heart disease, strokes, etc. fell off the map.  Many hospitals were 90-100%, COVID19 patients.  We were very close to exceeding our capacity in NY.  Very close. Too close. We cannot let this virus come roaring back; otherwise, we risk being overrun once again.

Granted, there are parts of the country with far fewer affected people.  That’s fantastic that you were spared the horror that is NY right now.  And as Fauci points out, making sure this doesn’t come roaring back with a second wave is critical.  Even in areas with less dense involvement.  Dr. Fauci also states that a return to work in certain regions should be facilitated by a broad testing strategy, contact tracing and contact isolation.

The area under the curve: We need to crush the curve. Not just flatten it.

Integral calculus is not broadly understood.  The area under the curve also matters.  The area under the curve determines the total number of people who will be affected over time.  By flattening the curve and drawing it out longer, it’s entirely likely that we don’t decrease the overall case number. We just changed when those people would become infected so that we didn’t overwhelm our healthcare system.  Let’s not split hairs… yes, we may have decreased the overall number who would be infected… but not as much as you think.  But this could all change… quickly.

What we as a country and a global society choose to do next is critical.  Very critical. 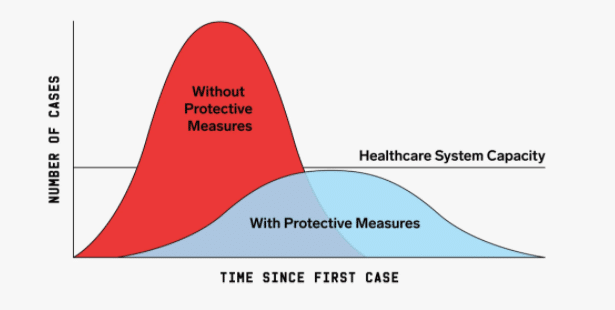 Flattening the curve protected our healthcare system and many of you from being infected over the last few weeks.  Social distancing, work, and travel restrictions worked. We won’t know how many lives were saved.   But we didn’t eliminate the risk of the SARS-CoV-2 virus from roaring back.  Now we need to crush the curve.

Crushing the curve will dramatically decrease the area under the curve… and thus the overall number of people who will die.

How do we crush the curve?

As of this morning, 16,692 people have died.  That’s a lot of people.  And that number can scale much higher if we do not approach our next steps carefully.

Testing is such a critical next step. Without testing, we do not know who is immune, and who is carrying the virus.  We know that many folks are spreading the virus around without knowing they are sick.  If we test aggressively, then we can start to determine who can return to work.  If we test aggressively, we can determine who needs to continue to be quarantined, and we can perform contact tracing to see who they interacted with.  We need to interrupt these “transmission chains.”

I think that you might also see the private sector start to do this on their own.  I think that large companies may start testing their employees to know who will be able to return to work.

If broad testing, tracing and isolation is implemented, and if the private sector steps in to test their own employees then many experts believe that we might be able to start to return to work in earnest by mid-June.  That position is backed by some of the better strategies put forth by Scott Gotlieb, etc.

Keep an eye on Singapore:

Singapore was a model nation. Like South Korea, they were way out in front of COVID19.  They implemented broad testing, and contract tracing and didn’t need to shut down their entire country to control the spread.  But things might be changing there… their new cases are spiking. We need to watch this closely.  If Singapore can’t handle a second wave, I’m afraid of what might happen in the US. 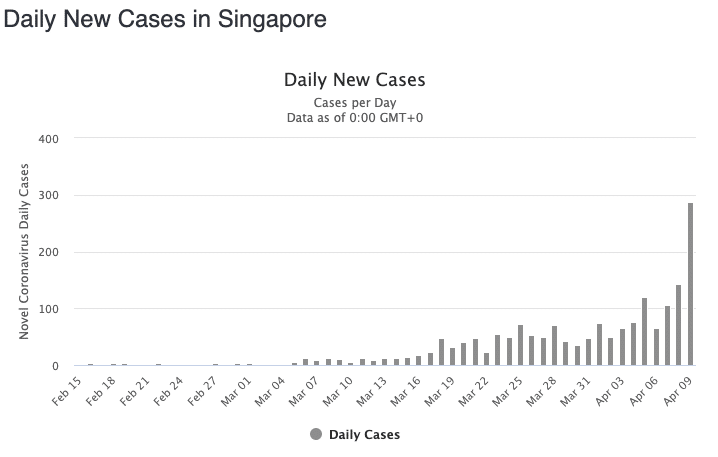 The financial pain across the globe is enormous. We all know people who are food insecure, housing insecure, and will potentially lose their business, home, or insurance because of this.  That’s where the government comes into play.  It’s easy to talk from a pulpit about the need to get back to work… especially when they can’t see the pile of dead bodies growing by the day.  Morgues, and funeral directors, have been overrun.  There are refrigerated trucks parked outside most NYC hospitals. They’re not there to hold food.   Some cities considered mass graves as a short term way of dealing with all the bodies that were piling up.  Perhaps the next person to speak about immediately getting back to work should broadcast with that image in the background.

Many people have articulated well thought out and well constructed strategic approaches for going forward.  But there is a vast difference between a strategy and a plan. 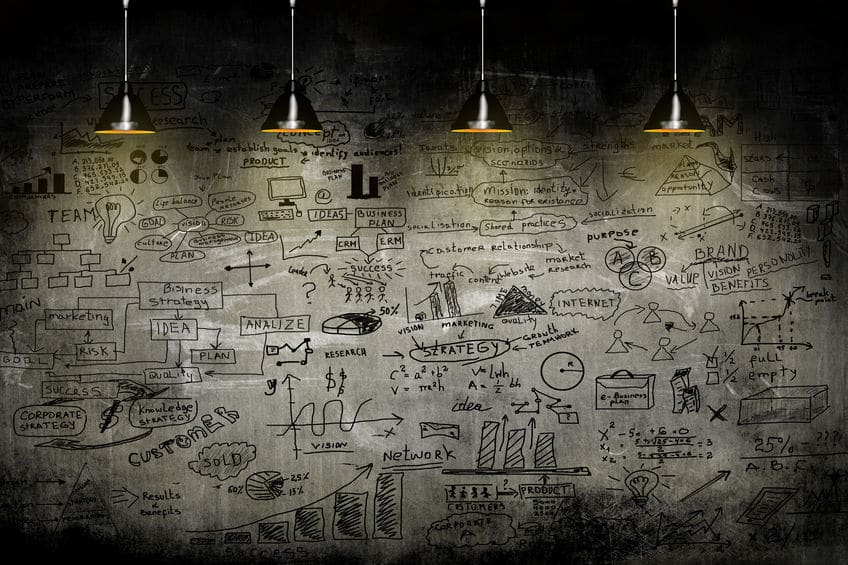 A well thought out strategy is the easy part. The tricky part, the plan, identifies in real moving parts with respect to how the strategy will be put into action and accomplished. Because it is in those weeds that success and failure are determined.  Execution, execution, execution.  Ideas are a dime a dozen.  Unless there is a competent person in charge, mass hiring, and training, etc. — the best strategy is worthless.

What’s at risk? A second wave.  And there’s no telling how high or broad that might be. 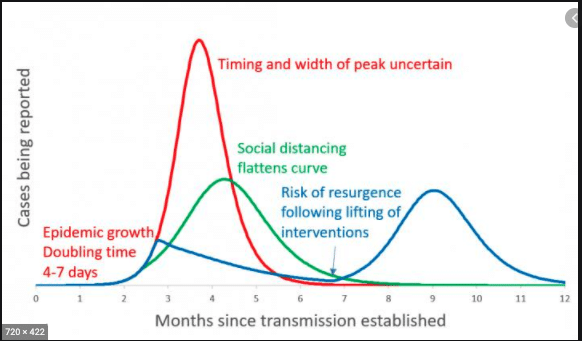 Going forward will be very challenging. There will be many competing theories of how this country and others should move forward.  Moving forward with politics as your driving motive will lead to more death and despair than we have already experienced.

Moving forward from a good strategy to a well-executed plan is critical.  Do not expect social distancing measures to lifted anytime soon.  We are in this for the long haul… and we are in this to protect and save lives.  Your actions today could result in the death of someone you never knew.  Please continue to wash your hands as if your life depended on it.  Please continue to use masks in public.