Lisfranc injuries of the foot can be very severe.  A Lisfranc injury can involve ligaments tears or a combination of fractures and ligament tears.  Either way a Lisfranc injury will often require surgery if the bones in the foot become unstable.  Recovery usually involves 6 weeks on crutches and a prolonged time before a return to activity can be expected.

Anatomy of the Lisfranc Joint 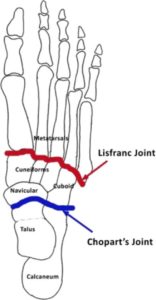 The Lisfranc joint is an articulation between various bones within the foot. It includes all joints between the 3 cuneiform bones as well as the cuboid and the bases of the 5 metatarsals. Because of the arrangements of these bones, there is an inherent stability, which makes the midfoot fairly rigid.  Furthermore, when the bone alignment is altered, this articulation can become unstable and result in further morbidity.

Cause of Lisfranc Injuries

These injuries are extremely rare in the general population and frequently overlooked or misdiagnosed. They commonly occur in the athletic population as a result of a lower energy mechanism while traumatic motor vehicle accidents causing higher energy injuries. These injuries mainly occur when the foot is positioned such that extraneous forces lead to torsion of the forefoot or axial loading and crush-type mechanisms.

A complete clinical assessment is a prerequisite before rendering appropriate treatment. As such, imaging studies, including weightbearing radiographs, if possible and the patient is able to tolerate them, should be obtained. Identification of displacement between the first and second metatarsal bones or within the tarsometatarsal articulation is paramount. Evidence of instability exists when there is more than 2 mm of separation between the medial cuneiform and the base of the second metatarsal.

In the presence of instability, surgical management is generally the recommended treatment course. Two options exist based on the patient and their history.  It is generally accepted, that for acute injuries open reduction and internal fixation be performed with orthopedic hardware. However, for delayed injuries, fusion (arthrodesis) is the recommended treatment of choice. No two Lisfranc injuries can be compared to one another as the specifics behind each individual injury can distinguish them from one another.

It is important to understand that you will likely be nonweightbearing on the operative leg for approximately 6 weeks after surgery. During this time, it is possible that you will be transitioned from a postoperative splint, a noncircumferential protective device, to a short leg fiberglass cast and possibly to a CAM walking boot.  As you continue to recover, he will notice that you’re swelling will gradually improve with time. Generally speaking, swelling may be present for at least 6-9 months after surgery. As a result there may be a delay in transitioning to normal shoe wear which may take approximately 3 months after surgery.

Be sure to have a complete understanding of the type of surgery that is planned for you. For certain patients in whom an open reduction and internal fixation is performed, the screws and/or plates may be removed.  The timeframe for removal is generally 4-6 months after the original operation.

Lisfranc injuries to the midfoot can be life altering.  It is important to understand that anatomic restoration of an unstable joint articulation is imperative, when applicable, for an optimal result.

Adam Bitterman, DO is a Foot And Ankle Fellowship Trained Orthopedic Surgeon in Huntington, NY.