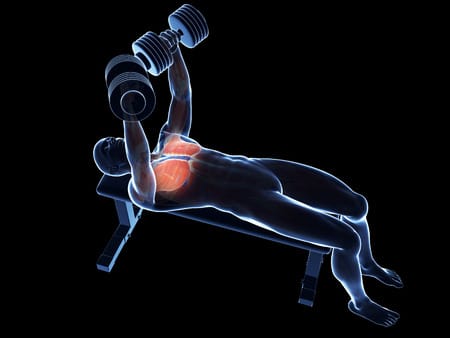 Many of you an recall just how much our pecs hurt, or our quads hurt 2 days after deciding to work out for the first time in a while.  Delayed onset muscle soreness, or DOMS is the reason that memory is painfully and easily recalled.  DOMS usually occurs after performing an exercise we are unaccustomed to.  Unlike the mild soreness which we have the day after a workout we are comfortable with, DOMS usually ramps up and worsens by day 2.  In severe cases it will continue for another two days after that.

Delayed onset muscle soreness is caused more often by eccentric training.  That means that the muscle you are exercising is lengthening while you are trying to fire it.  Think about going downstairs or squatting.  Your knee is bending, your quadriceps are firing, but the quadriceps is actually getting longer.  That is an eccentric exercise.  Although DOMS can occur with routine “concentric” exercises, the pain and incidence of DOMS is higher following eccentric training.

Despite what you may read elsewhere there is no known way to treat or prevent DOMS.  Many have tried anti-inflammatories in an effort to ward off the eventual pain, but that causes even more harm to your system.  Anti-inflammatories prior to exercise may cause your gut to become “leaky” and thus promote an inflammatory state.  It also raises the risk of ulcers, GI bleeding and kidney disease.  Worst of all, according to our current knowledge, DOMS is not caused by inflammation.  Inflammation might actually help “heal” delayed onset muscle soreness… so best to avoid anti-inflammatories if you can.

Your best treatment for DOMS is to avoid it.  When performing a new exercise, or you are heading back to the gym or pitch after a prolonged rest just chill out.  Do a few easy sets and go home.  Next time at the gym do a few more sets, and keep adding on slowly and your muscles will get used to the load.