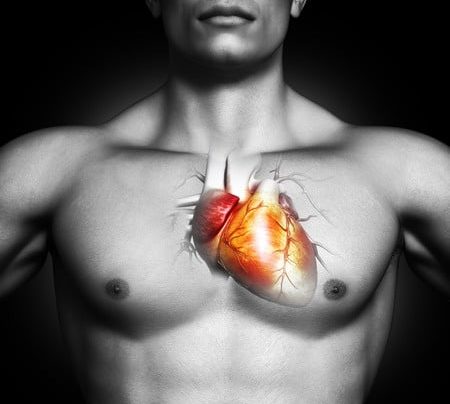 Sudden cardiac death in young athletes continues with alarming frequency.  The most common cause of sudden death in the young athlete is hypertrophic cardiomyopathy or HCM.  Simply put, HCM means the heart muscle is bigger.  Many of us beleive that bigger muscle means stronger muscle.  That is not always the case with the heart.  The heart is a mechanical pump with a complex arrangement of chambers which store the blood. How that pump works is controlled by a very complex electrical system.  Hypertrophic cardiomyopathy can interfere with one or both of these critical functions of the heart and lead to sudden cardiac death.

This weekend we witnessed an athlete collapse in the middle of a basketball  game.  After playing a good portion of the first half, Tyvoris Solomon was on the bench and suddenly collapsed.  One person began fanning him, and the coach knelt down in prayer, luckily, others began chest compressions.   Mr Solomon’s heart was restarted and he was brought to a local hospital for further evaluation.

How does HCM lead to death in athletes?

Sudden cardiac arrest usually is due to extremely fast heart rates. This is called an arrhythmia.  An arrhythmia can occur because the electrical wiring in the heart is affected by the excessive muscle growth in HCM patients.  The most lethal forms of abnormal heart beating is coming from the bottom chambers of the heart. It is called ventricular tachycardia or ventricular fibrillation.  In essence, the heart is going too fast to actually pull blood in and then move blood forward.  The body, getting no blood, begins to shut down, starting with the brain, which is why athletes collapse.  If not addressed quickly, our organs begin to die one by one, in a matter of minutes.

What is the cause of sudden death in athletes?

The majority of cases of sudden death in athletes are due to a heart muscle condition called hypertrophic cardiomyopathy, where the heart muscle is too thick.  Despite thickening, the heart can function quite normally for many years.  This explains why many of these kids are high performance athletes. HCM is usually an inherited disorder.  It is estimated to affect 1 in 500 people.  Not all athletes who have HCM will die because of it.  There are varying degrees of severity.

What are the symptoms of HCM?

Not all athletes with HCM will first present with sudden death.  Athletes of any age who complain of shortness of breath, lightheadedness, fainting or exercise intolerance should be evaluated by a cardiologist.  One or many of these signs might be present in athletes who suffer from HCM.  A heart suffering from HCM is very irritable… that means that its electrical system prone to develop these fast heart rates, often out of the blue but usually during or right after heavy exercise.

Can we screen for HCM?

Yes.  Any athlete with a family member who died at a young age, possible due to sports should be tested for HCM.  There are genetic screening tools as well as other tests that can be performed.  Not everyone who carries the genes in their DNA will develop HCM.  That ‘s why it is important to see a Cardiologist if you are concerned.  They will perform a physical exam, EKG and possible and ECHO.  A cardiac echo is an ultrasound that shows the heart. It can show you if part of the wall of the ventricles of heart are enlarged.

What you can do immediately after an athlete collapses

Proper training is critical. Sudden death is common enough that every school should have a protocol in place to deal with these situations.  Athletic Trainers are often very well versed in treating athletes who collapse on the court.  Every school must have a charged, and readily accessible AED or Automatic Electrical Defibrillator.   These devices will access the athletes heart rhythm and deliver the necessary shock to restart the heart.  Every Athletic Trainer should know precisely where their AED is when the games begin.

Other causes of sudden cardiac death in athletes

Other causes include other types of heart muscle problems that don’t involve thickening. Generally these diseases involve inflammation or diffuse weakness of the heart muscle, called dilated cardiomyopathies.  Some of these are new problems due to a viral illness, while others may have existed for years but only now are causing symptoms.  In addition to these, there might be abnormal electrical circuits in the heart present at birth, abnormal heart arteries which could get compressed during exercise, and sudden traumatic impacts to the chest – the latter a more obvious cause to the spectator watching the action.

Future strategies to decrease risk of sudden death in our athletes

To prevent some of these arrests, some countries have put forth more aggressive screening programs including a 12-lead electrocardiogram (EKG) or even an ultrasound (echocardiogram), before each playing season.  These would pick up hypertrophic cardiomyopathy in 90% of cases, and probably most cases of the dilated cardiomyopathy and some of the electrical problems.  It’s not perfect, but it’s a start.  While the American Heart Association does not advocate for these screening programs, largely due to cost analyses, inconvenience, or that it’s hard to prove they work, they still make sense.

Since hypertrophic cardiomyopathy is the majority cause, we need to do a better job of raising awareness about this disease, find the people at risk for sudden cardiac arrest, during athletics or otherwise, and get them to centers of excellence for this disease.  Dr. Srihari S. Naidu runs the HCM program at Westchester Medical Center (WMC).   WMC serves the New York and tri-state area, and beyond, and is committed both raising awareness of HCM, how it impacts people who may not even know they have it, and how to treat it before it becomes a problem.

Dr Naidu’s words are worth noting.

“It’s time we took control, so we are not shocked and bewildered next time (an athlete collapses) and instead (we) know exactly what we’re dealing with and what to do.”

This article was written with the assistance of Dr. Srihari S. Naidu.  He is one of the top experts in the field of HCM in athletes and I thank him for his valuable contributions.