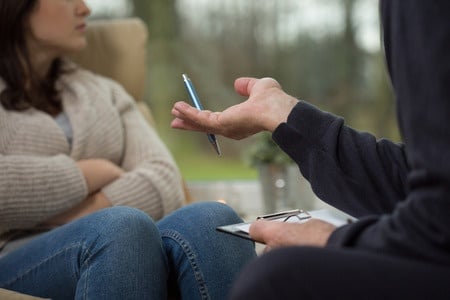 Bill was at a loss … He was seated among a sea of white coats in a room that felt as large as a shoebox.  He felt his pulse race as the big guy in a white coat spoke to the other smaller white coats.

Coming in at over 6 feet tall, Bill is no small man.  He just completed his third triathlon.  By day, Bill runs a large agency in the city and has 50 reports below him.  He makes tough decisions each an everyday… but he typically relies on data to drive those decisions.  He is not the type to feel that his comments are not welcome, nor unimportant. He knows when to chime in and when to remain silent.  He’s not sure how to behave in this environment.

Bill wondered why he felt that he wasn’t able to query the white coats in front of him.  Do they even see me — he muttered under his breath.

In Bill’s room was his doctor, a medical scribe, a Physicians Assistant and a medical student.  Not an imposing group … but they easily outranked in numbers the one person in the room who was in need of assistance. The doctor was speaking to the scribe so she could generate the electronic note.  Then to the PA to schedule the surgery for Bill.  The medical student got a quick lesson in anatomy and how to read an MRI…. all while Bill sat uncomfortably on the examination table. Bill realized he hadn’t  learned much of anything.  He had no idea what the terminology being passed around meant.  He wasn’t sure what was wrong… he was pretty sure something was torn, after all it was quite a fall he took.  But Bill was starting to feel better after a few weeks of rest.  He was still training — when he scheduled the visit he simply wanted to know if he was still able to train without causing more harm.

Most patients that enter our exam rooms have a few simple concerns.

Bil wasn’t any different.  He knew his shoulder felt different then it did before the fall, but he was getting better and remained quite active.  Putting on his shirt in the morning was a bit of a chore, and forget about reaching into the back of the car to pull something into the front seat. Other than that he was fine.

Bill had obtained a copy of the MRI of his shoulder and saw the mention of a “tear” in one of the structures.  He searched it online but didn’t understand most of what he read.  At this point of the visit with his physician, he still wasn’t sure what was wrong… nor why he needed surgery and whether or not there were other options on the table.

Bill was pretty sure he told the doctor that he was a triathlete  in training. He was certain he mentioned that his shoulder was feeling better.  But he couldn’t get past the thought that if something is torn it therefore must need to be repaired — right?  So Bill signed up for the recommended surgery.

Six months later Bill was still in pain, still in physical therapy, and he was just coming off of the blood thinners to treat the blood clot in his lung that almost killed him.  He hadn’t put on his running shoes, saddled his bike or approached a swimming pool — and was pretty sure he never would.

You see, the only procedure with no risk is the procedure which did not take place.

Most physicians are open to engaging with patients … and most do care about trying to do what’s right.  Some do not do a very good job at soliciciting your input and feedback and here’s where your role comes into play.

~ Early on in the visit your doctor needs to know how you hurt yourself… keep it short- I fell on my side and hurt my shoulder.

~ Your complaints matter… is it just painful, or is it weak, does the pain radiate, etc.

~ Are your symptoms changing? Are you feeling better?

~ How do your symptoms affect your quality of life?  Are you still active but want to know if it is ok to remain active.  Are you miserable and looking for anything to help make this pain go away?

~ If your doctor does not hear this information it is difficult to process a proper treatment plan specifically for you.  Do not wait until the examination portion of the visit begins.  Before the examination begins ask if you can fill your doctor in on a few more details… be specific.

After the examination with the doctor you should ask what their findings mean.  Does the exam show anything troubling?  Does it require further study?

~ After the examination your doctor will begin to elaborate on your diagnosis.  Make sure it is stated in way that you understand.  Some issues sound really scary in our language, when in actually they really aren’t.  The diagnosis must be clearly understood… if it isn’t, now is the time to ask them to put it in another way or to draw a diagram or show you a picture on the computer.

~ Now that your doctor has arrived at a diagnosis, they are formulating a treatment plan.  That plan should take into account the issues you discussed at the beginning of the visit — but unless that is stated clearly do not assume that it was.

~Ask specifically why that plan was considered.

~ Ask if there are other options available?

~ What will happen if I do nothing… will it get worse? Do I put myself at risk? Is that what the literature demonstrates?

Throughout the visit you should have been taking notes… and you should ask for a copy of your note that the doctor created.  Do not commit to surgery quite yet.  Relax, go home, speak with friends, go online and learn more about what it is that is bothering you and what the evidence based treatment plans are.

Bill now realizes he likely would have made a very different decision and…  and he will regret it for the rest of his life.