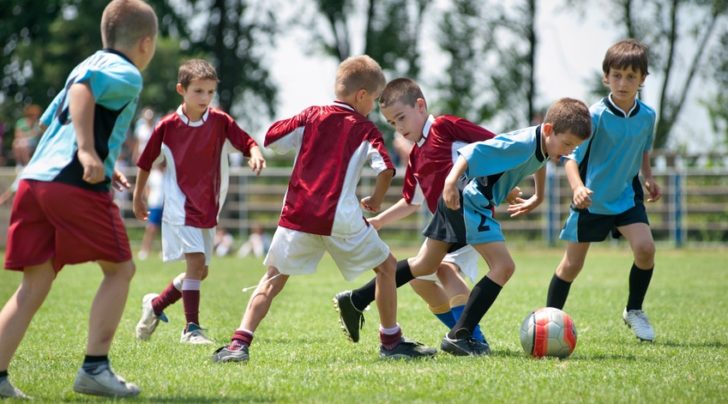 Single sport participation can be defined as the deliberate advancement of systematic training and planned competition …with the specific goal of guiding the child, on a long-term basis, to top achievement in sport.

Of course, there is agreement that the number of hours spent practicing a particular sport will result in a higher level of achievement in both individual and team sports.  The debate exists as to whether or not this intense practice must begin during early childhood.  There is little if any data to support the contention that early specialization leads to an increased chance of achieving elite status in sports.  Herein lies an important consideration.  With little chance of achieving elite status, it is therefore important that you understand the proven, and significant risks inherent in single sports specialization.

You know the story. Your children are signed up for your town soccer league, the travel team, skills and drills, the strength and conditioning soccer coach, etc.  This is not an unusual combination of yearlong activities for many of the children I see in my office.  The same can be applied to Baseball, Tennis, Lacrosse, etc.  Our children are specializing in year-long single sports at an alarming rate — and it is literally hurting them.  The coaching “experts” will claim that this type of training is necessary for athletes to attain elite status.  That’s all well and good for the 1% or less capable of doing so… but is it worth the cost to the other 99% who simply wear out, burn out, or are injured and never want to return to team sports participation?

“this [single sports] intensified training has no physiological or educational justification” 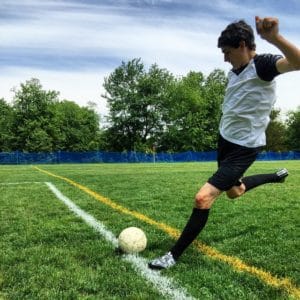 “unstructured free play should be encouraged to enhance enjoyment of sports, as well as promote spontaneity and creativity”

Those quotes are nearly 10 years old… but the research to support them is now becoming clear.  Single sport specialization exacts a significant toll, both physically and psychologically on our children.

From a physical perspective, single sports participation forces our children to work the same regions of their bodies and stress the same bones, ligaments, and tendons in the same manner day in and day out throughout the year.  Sports Medicine professionals have witnessed a dramatic rise in overuse injuries.  We have also seen a dramatic rise in devastating injuries such as ACL tears and ulnar collateral ligament (Tommy John) tears.  Many of these have been attributed to over-training and single sports participation.  Our bones, ligaments, muscles, and tendons require time to recover from a training effort. The cumulative stress and weariness that accompanies overtraining put your child at risk for an injury which can have lifelong implications.

Every child should take 3 months off from a sport

Early sport specialization is not a requirement for success at the highest levels of competition and is believed to be unhealthy physically and mentally for young athletes.

Burnout can lead to withdrawal from the activities that your children previously enjoyed.  In addition to a decrease in performance and an increased risk of injury, many athletes can experience clinical depression resulting in them walking away from sports and team activities altogether.

In conclusion, single-sport specialization has so many downsides. First and hardest to accept. You’re not (statistically speaking) raising a professional/elite athlete. Second, their injury rates are much higher than those who participate in multiple sports. Third… young kids are actually burning out. Many do not like the pressure, they just want to play.
Kids lives are complicated enough these days. They are growing up in a hyper-connected, hyper-competitive, more fragmented (warming) world… they need sports as an outlet. Most just want to have fun. The lessons they will learn from playing a team sport at any level are so important. The benefit to their health of simply being outdoors is immeasurable. 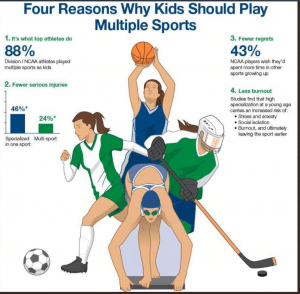 From the AOSSM Consensus Statement:

Early sport specialization has not been shown to be beneficial for high-caliber athletic performance at the national team/Olympic/professional levels, and in fact, maybe detrimental.

For most sports, early diversification (playing many sports) is more likely to lead to success. A survey of 376 female Division 1 intercollegiate athletes found that the majority had their first organized sports experiences in other sports. Only 12% has specialized at a young age.  Similar findings have been published with respect to other sports.

Early involvement in multiple sports provides our children the chance to develop their motor skills that include,  hand-eye coordination, jumping, throwing, hopping, balancing, and running. Most young adolescent bodies are not prepared for the rigors of single sports participation and training.  With continued diversification in sports at an early age, your child has the potential to adapt and develop multiple motor skills that will prove useful in many different sports. Then, as their bodies and psyche mature later in adolescence, specialization can be considered.

Single sport specialization is a trend which requires significant attention.  The physical and psychological effects are real, proven, and sadly are occurring with increasing frequency.  You may see a playing field full of active children … but you’re not seeing those at home who can’t participate due to injury, or those on a couch simply because they could not handle the psychological effects of intense training and gave up.

Kudos to many colleagues and organizations that are also addressing this critical issue;