Twitter is quite simply an information powerhouse.  It is like drinking from a never ending fire hose of timely, relevant information and conversations germane to nearly any topic you can imagine… including Orthopedic Surgery.

You’re having the same conversations you’re having with your professional colleagues at the scrub sink… only this scrub sink accommodates a million pair of hands.

Why are the value propositions of twitter still so poorly understood by the vast majority of practicing Orthopedic Surgeons?  Is it:

I imagine the true reason is blurred somewhere between the lines of all of the aforementioned. Of course most of us hear, it is due to a lack of time .. but I simply don’t subscribe to that theory.  We’re not too busy, we’re poorly organized. We find time for the activities we deem to be informative, productive, pleasurable or desirable.  We find the time to read a professional journal, the NY Times, Guardian or Washington Post.  On Twitter, and perhaps with the aid of Flipboard,  you could peruse all those journals, and major headlines, discuss the issues with other equally interested people and never put your iPad down. You can send interesting links to Evernote  to read  later or to place into your talks.

By picking and choosing the people you “follow”, you could find yourself conversing with the CEO of Aetna, columnists from the NYT, CNN, the WSJ or most any other major publication around the world.  Your professional organizations are interacting and are pushing content to you, the thought leaders in your specialty or an area of interest are on Twitter too.   Not sure where to find them?  That’s where “lists” and hashtags are useful.  Healthcare hashtags as managed by Symplur* enable you to find a topic of interest that runs a “chat” on twitter nearly every week.

Serendipity is equally as enlightening — you will inevitably be following someone who “retweets” a post from someone else.  Were it not for serendipity, and the power of pull from the periphery, you would never have met that other person who has nearly identical interests to yours. Hmmm    By clicking through to the links provided by your peers, you will undoubtedly come upon people they follow who share your same interests, and post equally useful information.

Consider the following tweets, how they differ in context, and how they just might interest you:

In this “tweet”, Dr. Ruth Ann Crystal picked up on a story put out by the American Academy of Orthopedic Surgeons (@AAOS1) regarding the use of stem cells in patients who had undergone a menisectomy.  The link refers the user to the article.  Since Ruth is in my network, she alerted me by using my twitter handle (@hjluks).  That way she knew I would see it.   I found this  article interesting,  browsed it and with one click “retweeted” it so my 13,500 followers would see the same article.  By broadcasting this to our networks, the overall “reach” of this article was nearly 30,000 people. If other people retweeted it, the overall reach rises exponentially.    The velocity of information transfer is astounding.   In some cases, you may wish to contact the person who sent the tweet directly, and privately and you can do so with a “DM”, or direct message. This particular tweet stirred at least 4 private conversations via direct messages with Orthopedic providers around the globe. 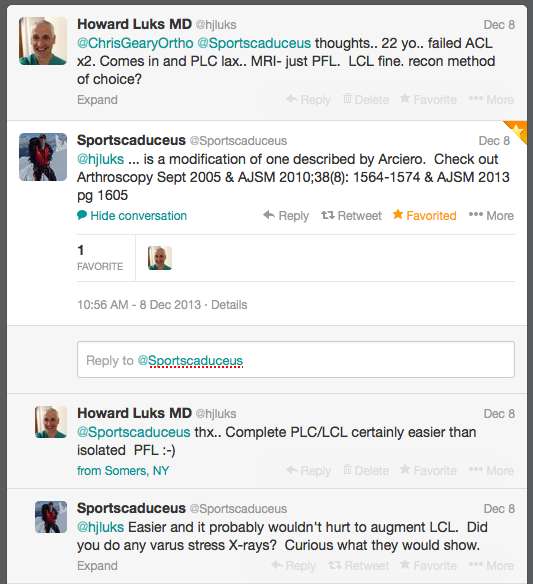 In this set of tweets I wanted to show the power of twitter to be able to reach out to knowledgeable colleagues for timely, actionable guidance or information.  @sportscaduceus is the team doc for the US Ski Team – Go USA.  He was the first to respond to this query, and many others like @DrDavidGeier chimed in as well.  Dr. Geier is the Chief of an academic sports medicine program in South Carolina.  After my initial tweet, my colleagues had provided me with a technique and a link to the article describing it.  Later tweets and discussion ensued regarding fixation options, and other tweaks to the procedure.

Patients are on twitter.  Their desire to learn brings them to drink from the very same fire hose that is twitter.  Consider this: There are nearly 20 twitter handles (names) dedicated to ACL injuries alone.  Patients are looking to follow leaders and knowledgeable surgeons in an effort to gain a better understanding of their condition.  They will not come at you with specific treatment recommendations.  Boundaries are generally very well respected, and they truly appreciate our assistance.  You gain followers, credibility… and perhaps a patient or two.

Come March and our annual meeting, you can sit at home, and follow the assigned hashtag to keep up on most of the major breaking news coming out of New Orleans.

Establishing and maintaining a presence on twitter is simply not built around a desire to socialize.  This is where important and professional conversations are taking place.  This is where you will be the first to learn of a new procedure, a new paradigm shift, a novel business practice which just might interest you.  You’re having the same conversations you’re having with your professional colleagues at the scrub sink… only this scrub sink accommodates a million pair of hands.

* – Disclosure: I am a principal at Symplur