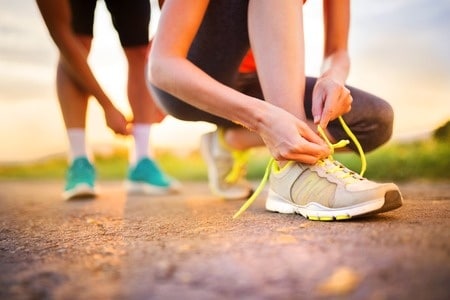 Choosing the proper running shoes can make or break a runner’s season.  Running in the wrong shoes can set you up for stress injuries, blisters, black toenails and a season of pain.

As runners, we know that picking the right pair of shoes is important, but how do know which running shoe is right for you?

Going back many decades, it was felt that over-pronation or flat feet predisposed an individual to foot injuries.  It was also concluded, especially in the minimalist movement, that the impact characteristics of your running style would significantly alter your running mechanics and thus impact the potential development of a running injury.

As this review in the British Journal of Sports Medicine shows us … there is no quality research to support either of those two assumptions.

For as long as there have been Orthopedists and Podiatrists, there has been a focus on “abnormal” foot positioning.  It was always felt that a pronated foot was a foot waiting to have problems.  Unfortunately, very few studies with a reasonable sample size are available to state that pronation leads to running injuries.  To the contrary, this study of novice runners showed that moderate pronation, if anything protected the runner from injuries.  A mild to moderately pronated foot is a flexible foot… as opposed to those with high arches, where the foot is more rigid.  Perhaps that is protective, unless profound pronation is present.

The minimalists pointed to studies which revealed that the skeleton adapted differently with regards to its motion pathway if you ran barefoot.  Many studies used markers on the skin or shoes to estimate the relative motion differences. It turns out that external markers are not very accurate.  When these researchers actually put pins and markers into the bone of the study subjects the results showed very little difference between motion of the the bones in your feet whether you were barefoot, in running shoes or wearing orthotics in your shoes.

So, what does all this mean? It appears that you should simply choose the shoe that feels most comfortable to you.  Purchase your shoes at a store that will allow you to run in many different shoes. Ignore suggestions based on the overall appearance of your foot, and go with your gut… or foot in this case.

Probably the best advice of all is to have a few different pairs of shoes — all of which were purchased because they felt the most comfortable.  Each manufacturer bolsters a different part of the shoe.  They also put more cushioning in different areas.  So each shoe will stress your foot differently.  By alternating your shoes, you will spread the force of your running a little differently in each shoes, thus minimizing the risk of injury by staying in one shoe… and focusing the stress in one area day in and day out.