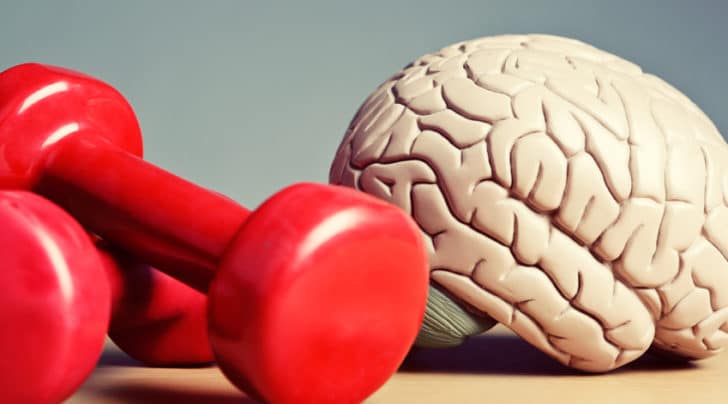 Muscle function and cognition decline with age. Sarcopenia is the medical term for age related muscle loss. That means that if you are older than 40 and do not regularly perform resistance exercise then you will experience muscle loss. As we age we will often see a concomitant change to our cognition, memory, and recall. We are not talking about true dementia (yet), just a decline in our ability to process information and recall facts.

I found this paper I on the effects of exercise and supplements to be very interesting. In this experiment, volunteers were fed a supplement containing 1,500 mg n-3 PUFA (which delivered 700 mg EPA and 445 mg DHA), 30 g whey protein, 500 IU vitamin D, 2.5 g creatine, and 400 mg calcium, twice daily.  A 6 weeks supplementation period was followed by a 12 weeks exercise intervention.  This included whole body resistance exercise and high intensity exercise training.  A control group was fed maltodextrin, and also followed the same exercises.

The authors found that the group that was supplemented had significant improvement in their executive function, long term memory and overall cognitive function.  They did not find the same effects in the control group, despite following the same exercise protocol.  That leaves open the possibility that the aging brain requires optimal nutritional priming before the cognitive benefits of exercise will be observed.

The authors also found that the observed improvements did not occur until nearly 3 months into the experiment.  This brings to light the fact that the aging brain may require longer term nutritional support for exercise to exert its potential beneficial effects.

This earlier study  suggests that creatine has a protective effect on the brains metabolism and thus cognitive function.  They believe that creatine helps provide energy to the brain during times of stress.  These stressful events can be a traumatic brain injury, or a period of intense exercise.  Dementia arises in part due to a malfunction of energy production in various parts of the brain.  Whether or not creatine has a role in dementia is not known- at least to me.

This former study was not adequately powered to say that you should start taking these supplements.  You should not start taking these supplements unless your doctor approves it.  This is also the first study that performed exercise following a supplementation period.  This study brought forth many more questions than it answered.  As I have alluded to in earlier posts on cognitive decline nutrition has a role in minimizing our risk for certain chronic diseases. Exercise seems to be the best prescription to minimize the risk for suffering from chronic disease. It may prove to be true that the aging athlete requires nutritional support beyond a healthy diet.

This last article I read evaluated previous studies to see if other forms of nutritional supplementation, or exercise + nutritional supplementation led to an improvement in cognitive function and muscle performance.  It is worth reading.  The authors found that supplements such as flavanols (Cocoa), EVOO + Mediterranean diet, fish oil and others produced an improvement in memory, cognition and muscular performance.

These papers brings us one very small step closer to seeing the interplay between supplementation and cognitive benefits after exercise in a healthy aging population.  Many more detailed and in depth future studies are needed.